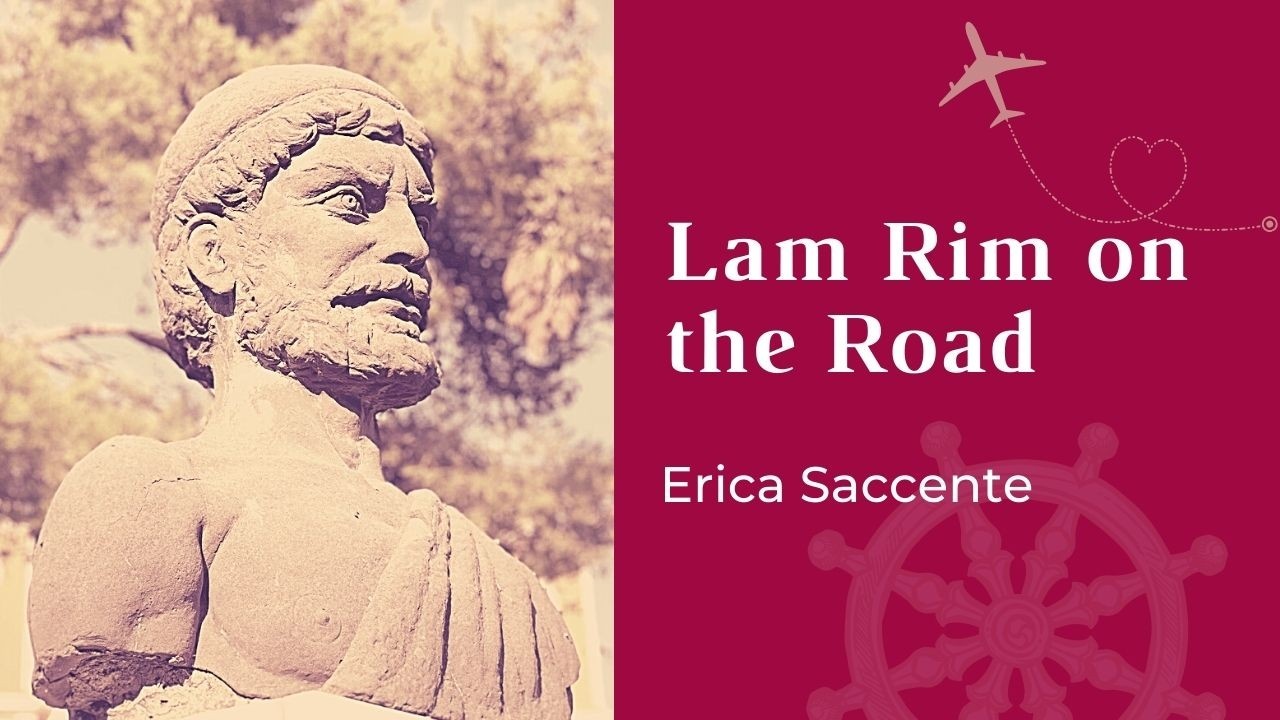 The second instalment in the Lam Rim on the Road travelogue by guest contributor Erica Saccente.

Overlooking the silver sea, I drink a cup of coffee and try to recount the events of the past two weeks on Ithaca. This hypnotic island warps time so that a week feels like 24 hours and 6 months simultaneously. Days blur into nights, and you lose track of what happened when, if you can remember at all.

Nine church bells signal that it’s 9:00AM, but it’s already stifling outside – a passing heat wave. A lull has come over the house. With the children gone, the cicadas’ buzzing seems louder. Ants swarm a morsel of food near my feet, a water current dances in circles across Afales Bay, and the unwavering pine trees stand tall and proud. The air is hot, humid, and still. Merciless mosquitoes bite and leave painful welts. Thick layers of laziness envelope my body like a heavy blanket. My mind is active, and word bunches pour freely onto the page.

My thoughts are currently occupied by mythology and the theme of homecoming. Although the connection with a specific step on the lam rim is unclear, these contemplations seemed worth sharing. After a helpful conversation with Miles, I decided to surrender the rigid ideas I had about how to write the blog. I was trying to match the theme of each entry sequentially to the stages on the lam rim. Instead, I will write when inspiration strikes.

Earlier this week, we went to an important archeological site on the island believed by some to be the Palace of Odysseus – that is, the home of Odysseus in the epic poem, the Odyssey. In the story, Ithaca is named as the island home of the hero. While the specific location of the island is debated, modern Ithaca is generally accepted as Homer’s island – Homer being the figure to whom the Odyssey’s authorship is traditionally attributed. The epic contains detailed geographical descriptions that match the ruins and views found at the archeological site. It is unknown whether the central characters in the Odyssey were real or fictional, and to make matters more mysterious, no one knows if Homer was an actual person who lived and died. If he was real, he is believed to have lived around the 8th or 9th century BCE. He is often portrayed as blind, which is also curious given the vivid descriptions in the Odyssey. Others believe the word Homer referred in general to wandering, blind poets, as opposed to one specific person by that name. Regardless of who wrote the Odyssey, and whether the characters were fictional, the epic is a tremendous contribution to Western literature.

A summary of the story: Odysseus is forced to leave his home on Ithaca to fight in the Trojan War. After the war, he endures an arduous 10-year journey to return home. He has no shortage of ordeals – from fighting mystical creatures to confronting the fury of Gods. Eventually, he arrives at his palace and kills over 100 suitors contesting to win his wife’s hand in marriage (and the seat on the throne). Finally, he proves his identity by explaining to his wife, Penelope, that their bed was built from the trunk of a living olive tree and cannot be moved. Once again, he takes his rightful seat as King.

Two central themes in the Odyssey are wandering and homecoming. Nostos is the Greek word for returning home, although its meaning is somewhat complicated. It can be understood as the longing to return home, the process of returning home, and the actual return. It suggests a sense of true belonging to this home. More broadly, it can mean any safe journey, as it also has an association with survival. Nostos is an escape from lethal conditions or a dangerous situation, whether that be an internal or external threat. Each time we re-emerge after a descent into darkness – a depression, an illness, destabilizing fear, grief – we experience the sweetness of nostos in the return from darkness and death to light and life.

Whether this archeological site was the home of the character Odysseus, or the home of Homer if he existed, one thing is clear – it is a sacred place with layers of history built upon one another. Perhaps Odysseus’s palace or Homer’s home, once a Byzantine Church, and most recently, a farmhouse – there are different levels of ruins with varying stone work. Creation and destruction are visible simultaneously. Centuries of death and rebirth observable in the present.

Although the word nostos does not mean home, there is a strong association between the two. I wondered whether there was any connection between the name Homer and the word home, but it appears to be nothing more than an aesthetic coincidence (Home-r). The word Homer is derived from the Greek word homeros, which means “hostage” or “pledge”.

And so, I find myself on the sacred island of Homer contemplating what it means to be home while on my own wandering heroine’s journey.

What does it mean to return home? Where is home? Is home a place? A person? A way of being in the world? Is it death, or as nostos suggests, survival?

Do we return home in the stages of dissolution – in the clear light, or perhaps in the midnight darkness when there is complete loss of individual identity?

Is home a sense of familiarity? Is it synonymous with love? Do we feel at home in our mother’s womb, where there is ideally a sense of safety, union, nourishment, comfort?

When I lived in NYC, I would sometimes be overcome by a desperate longing. Sitting in my apartment, I would say aloud, “I just want to go home”. This sentiment came from deep within me, and I didn’t understand what it meant. I suppose part of the reason I’ve departed on this heroine’s journey is because the place where I lived never felt like home. On some level, I had the intuitive sense that by exploring homelessness, I would discover a true sense of home. I realize now I’ve been longing for a homecoming. Maybe those of us with a restless spirit, who wanderlust and feel a drive to keep moving, are constantly searching for home. Will we ever find it?

Nostos is essentially the return of the hero’s journey. If we depart on an adventure, having left the place that never felt like home, to where do we return with the treasure?

Interestingly, I haven’t felt the desperate longing to go home since I left NYC. Perhaps some people feel most at home when wandering. Or, it could be that I feel more at home within myself now that I’m following my heart. I’ve also had the good fortune of spending some time with the kind of friends that feel like family. People with whom I can be myself around, where there is love, trust, and nourishment. I am at home when I feel seen, heard, and cared for by others, and when I pay attention to my inner life with the same degree of affection. In other words, I feel at home when I am connected – to others and to myself; when I feel a true sense of belonging and wholeness.

Regarding the theme of nostos, implied within is the fact that we can never actually “return to the same”. We will be different after the journey. Perhaps by the time we return, the part of us that made us want to wander will have died, and we’ll be ready to be home.

As for the lam rim, my sense is that the gradual path is a hero’s journey leading us to the ultimate homecoming.

Erica Saccente After 15 years in NYC, Erica decided to pursue a lifelong dream to live abroad. Letting go of the fear of disappointing others, she is following the call of her own heart. As she continues to work remotely as a contemplative psychiatric nurse practitioner, she will practice the art of surrender - having trust, listening to her intuition, and embracing a path of uncertainty. She will express her reflections of the Lam Rim through her love of writing and photography. Join her on the journey! 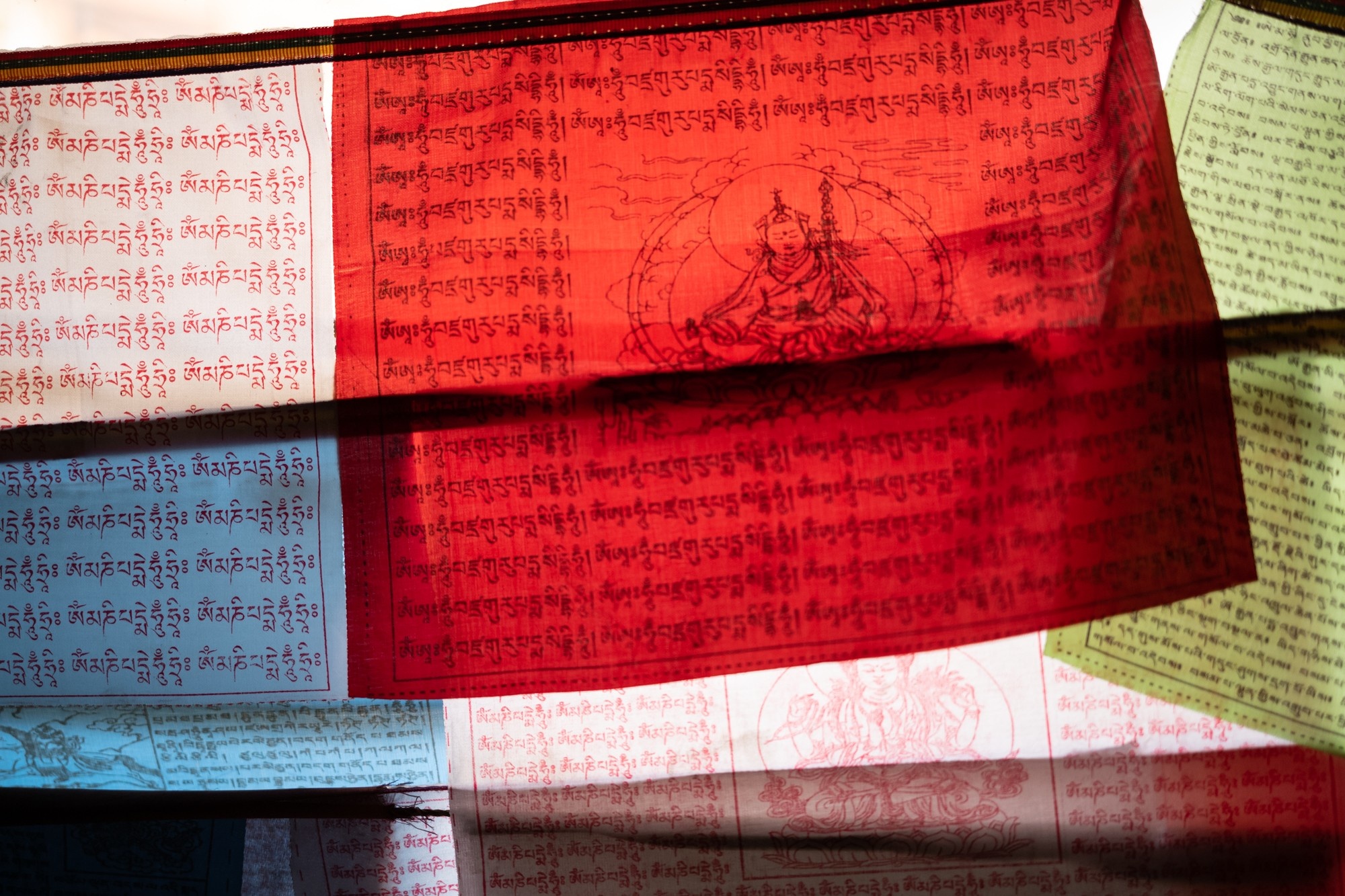